CABI’s Léna Durocher-Granger, joined Dr. Felicity Hayes & Dr. Mike Perring from UKCEH in hosting a webinar on the causes of ozone pollution and the consequences for farmers in Africa, Asia and South America. Entitled ‘Ozone Pollution: a current and future threat to tropical agriculture’, the webinar was aimed at policy makers, university lecturers and students in agriculture and food security, crop scientists, crop breeders and plant protection officers.

The webinar provided a series of presentations on the topic of ozone pollution, as well as a Q&A session. In addition, a number of polls were used to gathered useful insights into the audiences’ understanding and knowledge of the problems being discussed. While many participants were aware of the ozone layer and complications associated with damage to stratospheric ozone levels, ground-level ozone pollution and its consequences were less well known.

The webinar was organised in order to raise awareness and knowledge of the adverse impacts of ground-level ozone pollution on crop production. It also provided options for crop management adaptations to lessen ozone impacts.

Ground-level ozone is one of the most widespread pollutants in the world. It contributes to climate change, impairs human health and damages vegetation. Additional levels are produced when pollutants from human activities, such as industry and biomass burning, react together in the presence of sunlight. Concentration levels can be particularly high in agricultural areas downwind of large cities.

It is predicted that ozone pollution will continue to increase, with levels highest in areas with rapidly growing populations. This is particularly bad news for crop growers in developing regions, as high concentrations of ground-level ozone can have a negative effect on crop yields.

The webinar covered the hidden threat of ozone to agriculture, including how to recognise the problem and its chronic effects. The panel of experts discussed the visible signs of ozone pollution on crops, with a series of images highlighting the signs and symptoms to look out for. 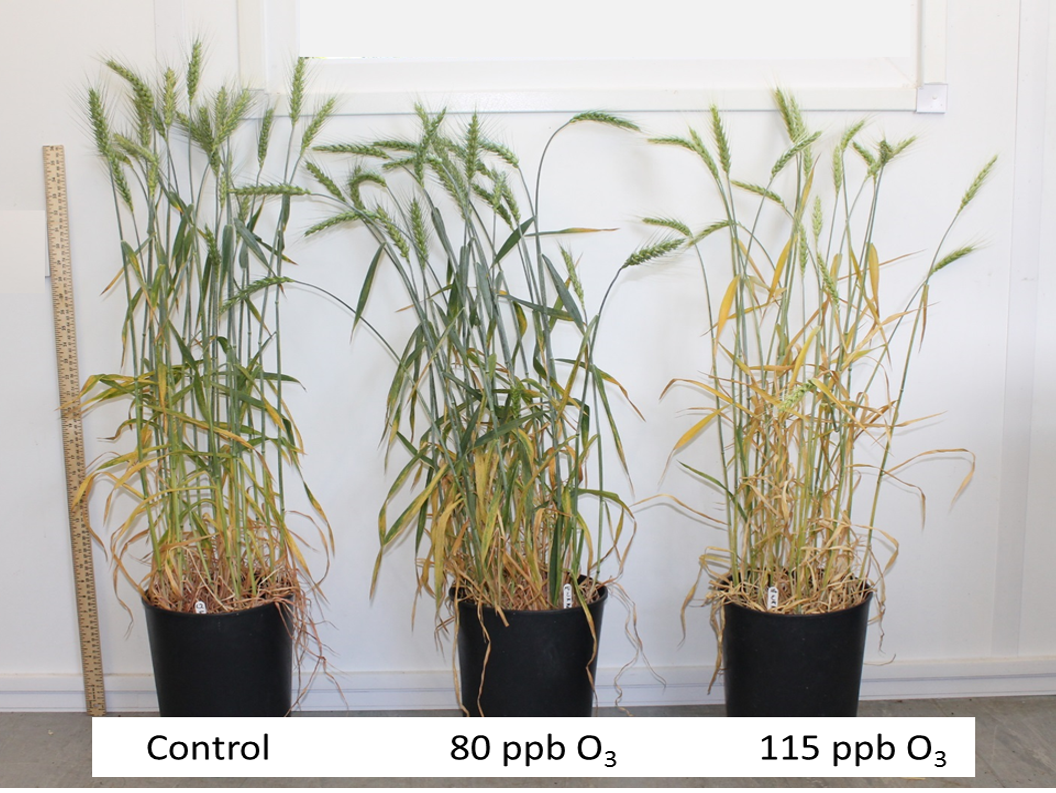 The webinar highlighted the negative impact ozone pollution has on crops yields. It accounts for 12.4% of global soybean yield losses and 7.1% of global wheat yield losses and, as such, has a considerable impact on the Sustainable Development Goals, particularly SDG 2 (zero hunger), SDG 13 (climate action), SDG 3 (good health and well-being) and SDG 15 (life on land).

The recording of the webinar is now available online on the UKCEH Youtube channel and all questions asked during the webinar have been made available with answers here.

To find out more on ozone pollution and its impact on tropical agriculture, factsheets are available both on the ICP Vegetation and Plantwise knowledge bank for South America, Africa and Asia. A Video and an online course produced by UKCEH are also available.

Watch this space for information on future webinars. Based on survey responses, we aim to organize webinars on a) comparing ozone injury symptoms with other sources of plant injury, and b) information for how agricultural stakeholders can manage ozone pollution.